36kr was informed that the semiconductor laser chip design and manufacturer Lemon Photonics has completed all manufacturing tests including performance tests and reliability tests for their independently developed VCSEL sensor laser chips, and has shipped samples to more than 30 customers for application tests, marking a full mass-production capability. 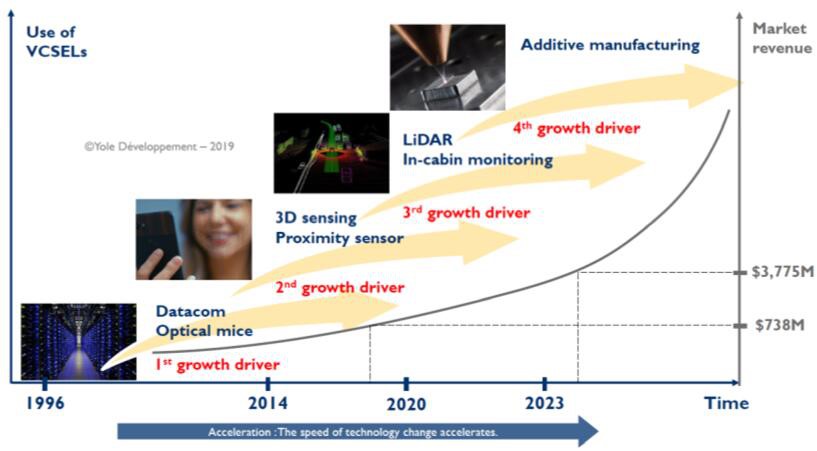 
Reports said that, the VCSEL laser sensor chips to be mass-produced this time can meet all applications in the near-infrared spectra. According to customer feedbacks, in a lateral comparison among the 808nm, 850nm and 940nm product series, the peak power conversion efficiency(PCE) could reach or approach 50%, the high temperature performance is even superior to some of the top international suppliers.
"This series of VCSEL laser chips help to reduce the energy consumption of 3D sensing components widely used in mobile phones and other electronic devices, and their service life is far beyond the requirements of mobile terminals. During the testing process, these chips can keep working for more than 3,000 hours without significant change in output power, "said Xiao Yan, founder and CEO of Lemon Photonics.

Entering the mass-production stage, it is very important to ensure the stability of the supply chain. To this end, Lemon Photonics has certified three foundry chains worldwide, and established a corresponding quality assurance system, which guarantees a monthly production capacity of more than 2,000 6-inch wafers.

In addition to providing standardized VCSEL laser chip products with different output powers, Lemon Photonics could also provide customized design services of chips and corresponding modules tailored to customers’ needs, such as customized conventional VCSELs with beam divergence between 20 and 30 degrees, and high energy density VCSELs for dToF applications which is currently under development

In recent years, with deeper insights and expanded application demands in the industry, VCSEL has entered the consumer electronics market as the infrared light source for 3D sensing applications, necessitating its functions in areas like face recognition, gesture recognition, 3D recognition, iris recognition and VR/AR applications. In addition, VCSEL can also be widely used in the Internet of Things, 5G communication, RF components, ADAS (Advanced Driving System) and other fields.

With the continuous advancement of 5G infrastructure construction, it is foreseeable that VCSEL's potential applications and market heat would be even more prominent. Light Counting, a market research institute has predicted that the global demand for VCSEL on smartphones would be 120 million counts in 2018, and will reach 240 million in 2019. According to "VCSELS - Technology, Industry, and Market Trends", a report released by Yole Development, the overall market size of VCSELs reached $330 million in 2017, and VCSEL shipments are expected to increase from 652 million in 2017 to more than 3.3 billion by 2023. By that time, the overall market size will reach $3.5 billion, and the compound annual growth rate from 2017 to 2023 will reach up to 48%.

In addition to VCSELs, research and development of HCSEL lasers and EEL edge-emitting lasers are also in progress. It is worth mentioning that the core members of Lemon Photonics have more than ten years of experience in the top international semiconductor laser companies. They have led or participated in the research, development and production of multiple mainstream laser chips. The team is equipped with all-round expertise in research, management and sales, many of whom have doctorate degrees from top universities in the US.

It is reported that Lemon Photonics has announced in August 2019 that it had obtained A+ round of financing of RMB 50 million led by Delian Capital and Joy Capital. In 2018, it completed the round A of financing from Joy Capital.